Be first to read the latest tech news, Industry Leader's Insights, and CIO interviews of medium and large enterprises exclusively from CIO Applications

Thank you for Subscribing to CIO Applications Weekly Brief

Ian Neilson, SVP - Global IT
“Creating an environment for people – normal people - to do extraordinary work together” is the notion that drives the force-amplifying culture at MedAvante, a clinical science data company that helps make clinical trials faster and smarter. With its headquarters in Hamilton, New Jersey, MedAvante carefully maintains a flexible and casual work environment that encourages innovation and creative thinking. MedAvante came into being to address a particularly intractable problem: the high rate of inconclusive clinical trials in treatments for psychiatric and neurological diseases – “failed trials” in industry parlance.

MedAvante brought together a team of leaders from pharma and academia to create Central Ratings, a science-based methodology that reduces measurement variability and curbs perception biases in trials that rely on subjective clinical assessments as primary outcome measures.
By centralizing the administration of assessments and carefully calibrating the clinicians conducting them, MedAvante was able to significantly reduce the risk of trial failure. But they were limited by pharma’s traditional reliance on paper and pen to collect source data, which is costly, time-consuming and subject to errors during data transcription. Understanding these shortcomings, MedAvante created the Virgil Investigative Study Platform and the industry’s first electronic source data (eSource) application to allow its own cohort of Central Raters to work anywhere without the need to store paper or transcribe data.

A recent study compared the use of paper-based outcome assessments with Virgil in clinical trials of treatments for psychiatric and neurodegenerative disorders. The results showed that assessments administered with Virgil showed far fewer errors that those conducted with paper and pen, ranging from 57 to 94 percent fewer errors across four commonly used rating scales.

Ian Neilson, Senior VP of Global IT, MedAvante, says, “With Virgil, we are leading the way to a paperless future of stronger signal detection, more efficient workflows, and higher-quality data in clinical trials by matching scientific leadership and clinical expertise with leading-edge technologies and methodologies.”

Building on its record of collecting more than three and a half million pages of eSource data over eight years without losing a single data element, MedAvante continues to add features and functions to keep pace with changes in life science and technology. MedAvante ensures all data is fully encrypted, right down to the memory card used as a temporary backup by the tablet application, and ensures that data is handled in full compliance with European and U.S. privacy regulations.

“With more than 687,000 completed assessments of 56,000 clinical trial subjects across 233,000 study visits, our source data has been accepted by both the Food and Drug Administration and the European Medicines Agency in successful regulatory submissions,” notes Neilson. “Virgil will be used to collect millions of clinical outcome assessments in global trials across a variety of patient populations over the next few years, and data mining and machine learning will increase its value by opening limitless possibilities for new discoveries in life sciences.” 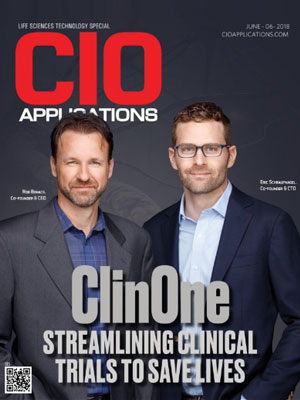 Previous Next
Tweets by CIOApplications
This content is copyright protected

However, if you would like to share the information in this article, you may use the link below: